1. What is Survival Analysis?

Survival analysis is a branch of statistics for analyzing the expected duration of time until one or more events happen, such as a death in biological organisms and failure of mechanical systems.

For instance, how can Survival Analysis be useful to analyze the ongoing COVID-19 pandemic data?

・We can find the number of days until patients showed COVID-19 symptoms.

・We can find for which age group it is deadlier.

・We can find which treatment has the highest survival probability.

・We can find whether a person’s sex has a significant effect on their survival time?

・We can find the median number of days of survival for patients.

・We can find which factor has more impact on patients’ survival.

Survival time and type of events in cancer studies

Survival Time: It is usually referred to as an amount of time until when a subject is alive or actively participates in a survey.

There are three main types of events in survival analysis:

1) Relapse: Relapse is defined as a deterioration in the subject’s state of health after a temporary improvement.

2) Progression: Progression is defined as the process of developing or moving gradually towards a more advanced state. It basically means that the health of the subject under observation is improving.

3) Death: Death is defined as the destruction or the permanent end of something. In our case, death will be our event of interest.

As we discussed above, survival analysis focuses on the occurrence of an event of interest. The event of interest can be anything like birth, death, or retirement. However, there is still a possibility that the event we are interested in does not occur. Such observations are known as censored observations.

There are three types of censoring:

Right Censoring: The subject under observation is still alive. In this case, we cannot have our timing when our event of interest (death) occurs.

Left Censoring: In this type of censoring, the event cannot be observed for any reason. It may also include the event that occurred before the experiment started, such as the number of days from birth when the kid started walking.

3) Interval Censoring: In this type of data censoring, we only have data for a specific interval, so it is possible that the event of interest does not occur during that time.

・ Analysis of sales staff for the first sales analysis

Survival analysis was originally developed and applied heavily by the actuarial and medical community. Its purpose was to answer why are events occurring now versus later under uncertainty (where events might refer to deaths, disease remission, etc.). This is great for researchers who are interested in measuring lifetimes: they can answer questions like what factors might influence deaths?

The North Central Cancer Treatment Group (NCCTG) data set records the survival of patients with advanced lung cancer, together with assessments of the patients’ performance status measured either by the physician and by the patients themselves. The goal of the study was to determine whether patients’ self-assessment could provide prognostic information complementary to the physician’s assessment. The data set contains 228 patients, including 63 patients that are right censored (patients that left the study before their death). 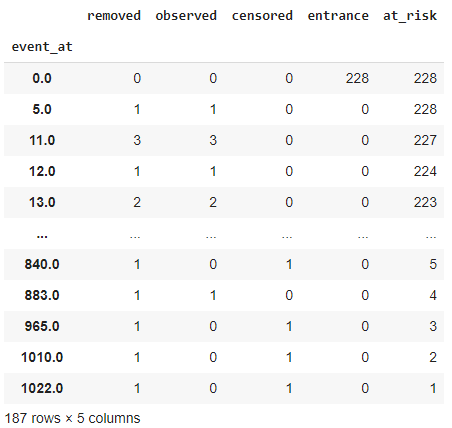 Calculating the probability of survival for individual timelines:

Let’s first see the formula for calculating the survival of a particular person at a given time.

Calculating the probability of survival for individual timelines:

Let’s first see the formula for calculating the survival of a particular person at a given time. 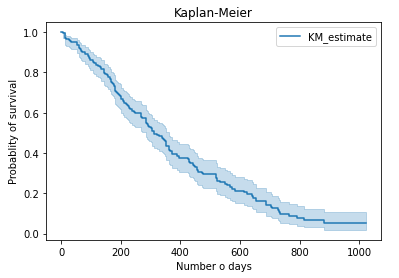 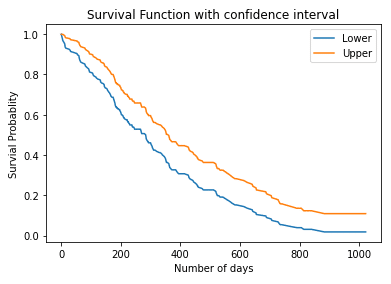 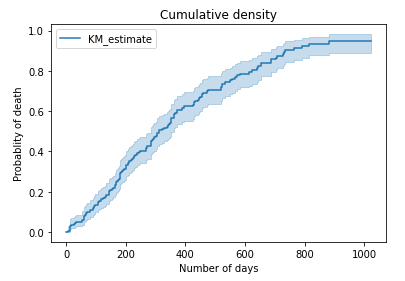 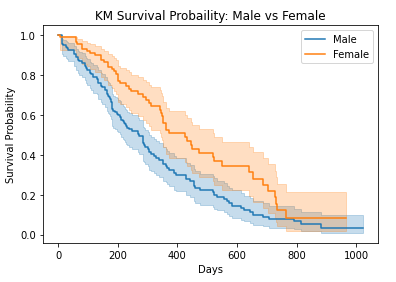 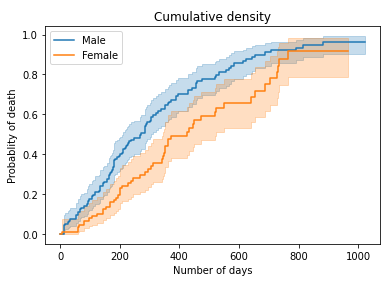 The log-rank test is a hypothesis test that is used to compare the survival distribution of two samples.

Goal: Our goal is to see if there is any significant difference between the groups being compared.

Less than (5% = 0.05) P-value means there is a significant difference between the groups we compared. We can partition our groups based on their sex, age, race, treatment method, and others.

We have compared the survival distributions of two different groups using the famous statistical method, the Log-rank test. Here we can notice that the p-value is 0.00131 (<0.005) for our groups, which denotes that we must reject the null hypothesis and admit that the survival function for both groups is significantly different.